a pretty good day so far

Feeling helpless, I turned off the radio and went outside 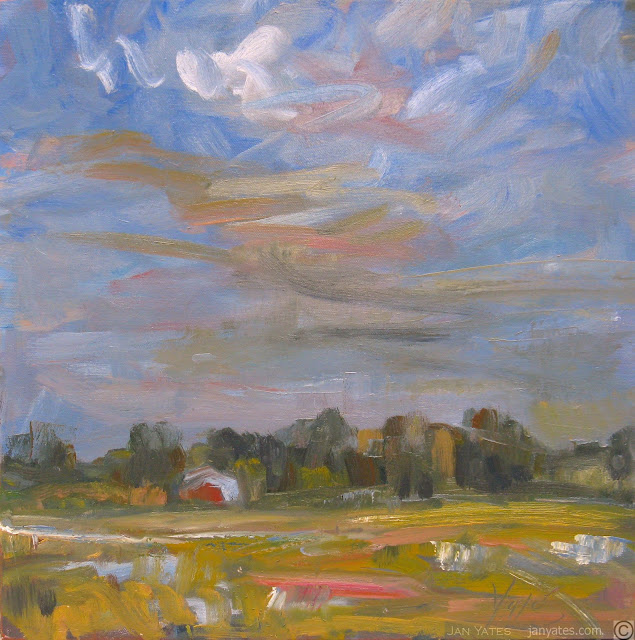 May (a pretty good day so far) oil on canvas, 24x24in, available for sale

I love these words by Loudon Wainwright and, although they are about war, I find them to be optimistic and somewhat reassuring. They make me think about the quiet in my life. I won’t take it for granted. ever.

I slept through the night
I got through to the dawn.
I flipped a switch and the light went on
I got outta bed
I put some clothes on
It was a pretty good day so far.

I turned the tap
there was cold there was hot.
I put on my coat,
to go to the shop.
I stepped outside
and I didn't get shot.
It was a pretty good day so far.

I didn't hear any sirens or explosions,
no mortars coming in from those heavy guns
no UN tanks
I didn't see one.
It was a pretty good day so far.

No snipers in windows taking a peek
No people panicked running scared through the streets
I didn't see any bodies
without arms, legs, or feet.
It was a pretty good day so far.

There was plasma, bandages and electricity,
Food, wood, and water,
and the air was smoke free.
No camera crews from I-TV.

It was all such a strange sight to behold.
Nobody was frightened, wounded, hungry or cold.
And the children seemed normal,
they didn't look old.
It was a pretty good day so far.

I slept through the night
I got through to the dawn.
I flipped a switch and the light went on
I wrote down my dream,
I made it this song,
It was a pretty good day so far. 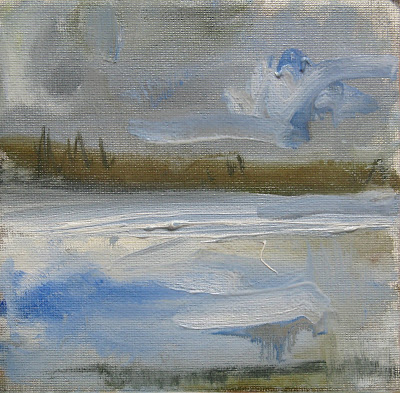 I have been back from my Ireland residency for a few weeks now-in body at least. What a magical setting to stir the imagination! I can’t seem to articulate all that the experience has left in my being, but I won’t hurry the unfolding either. Time spent living and working at the Tyrone Guthrie Centre has deeply affected me on many levels and will continue to do so. 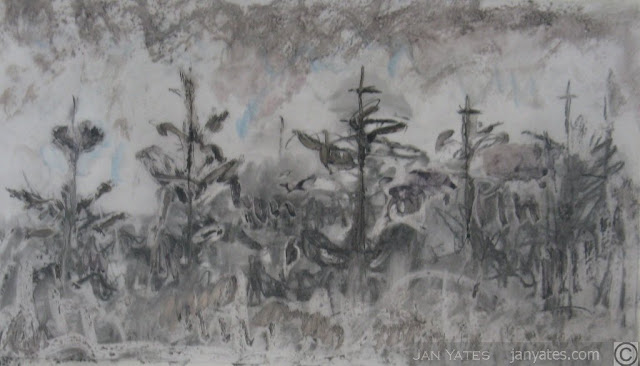 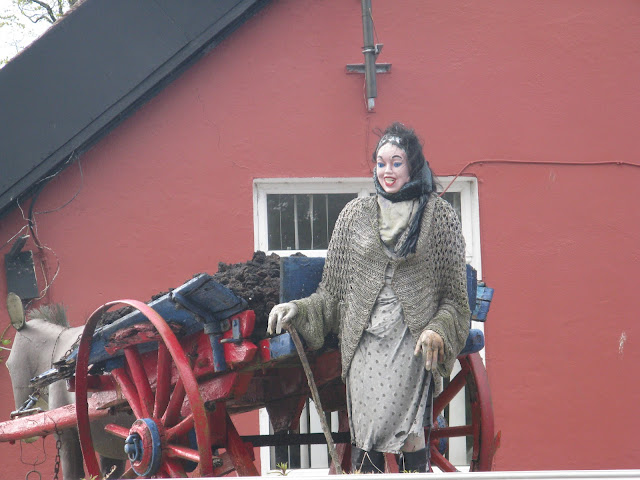 I have met colourful characters, spinning myth and truth woven and worn by families that have lived on the land for generations. As well, stories shared by fellow artists, musicians, composers and playwrights at Annaghmakkerrig deeply enriched my own spirit. The noise of life can really muffle our sensibilities and when it is removed the soul speaks about what is truly relevant.

As far as  making art, I did delve into new work and it was great to have the much needed time to do research. I am still processing and distilling all that I have learned but was surprised at how engrossed I became with Ireland’s political and religious history and how deeply intertwined they are. Because of my interest in agriculture  I started reading about the great famine -or ‘Black 47’ as it was more aptly named. 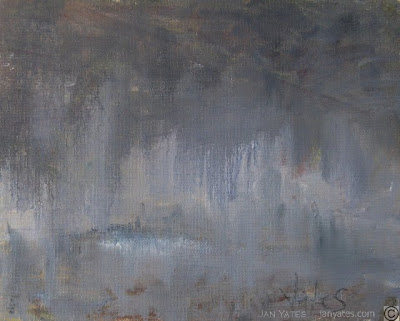 Admittedly I did not know much about it so was appalled and horrified when I learned that-in a very general nutshell- thousands of poor rural families were dying in their homes while food grown from Irish soil was being shipped to England for profit. The study above was in response to words by  Liam ó Comáin that very much resonated with me:
It was not what they called it
For the latter is born from nature
And therefore not man made.

This was man made-
In fact an attempt by non natives
To end a race via genocide.

And for what- four green fields
Whose produce was exported
As men, women, and children starved.

Of course the potato was blighted
But corn and other produce left our
Shores while inhumanity was confirmed.

Annaghmakkerrig is only a few miles from  Northern Ireland and this close proximity kindled  my on-going fascination with Ireland’s political history. One evening I was privy to engage in a lengthy conversation with someone who had participated in the IRA during ‘the Toubles’ and it was fascinating to learn, first hand, about growing up during  such a dangerous time of turmoil and political unrest. 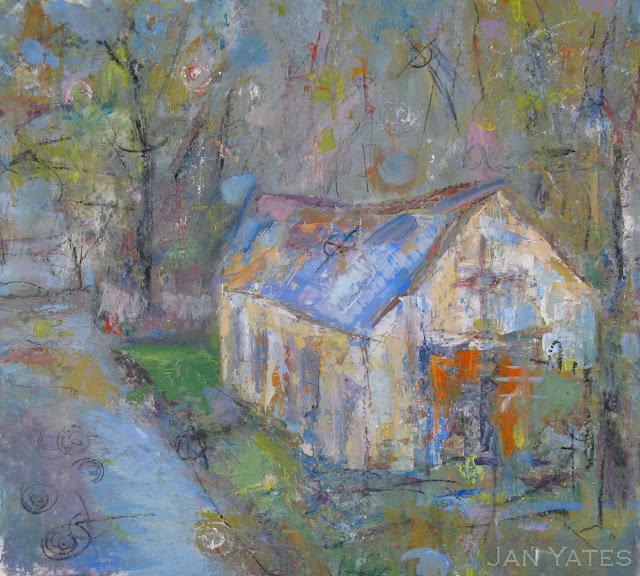 And on a more optimistic and wondrous note I have developed a keen interest in the symbols of  the Megalithic Passage Tombs at Loughrew and Newgrange, built by Neolithic farming communities about 5000 years ago! 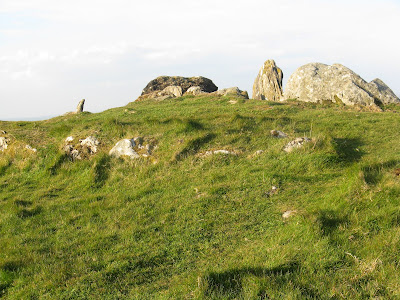 The passage tombs have clear astronomical alignments such as the Winter Solstice Sunrise at Newgrange and the Equinox Sunrise at Loughcrew.

I will continue to investigate…as well I have become fascinated with Irelands’  protective and protected faery forts and the magical and mysterious power of the hawthorn tree. 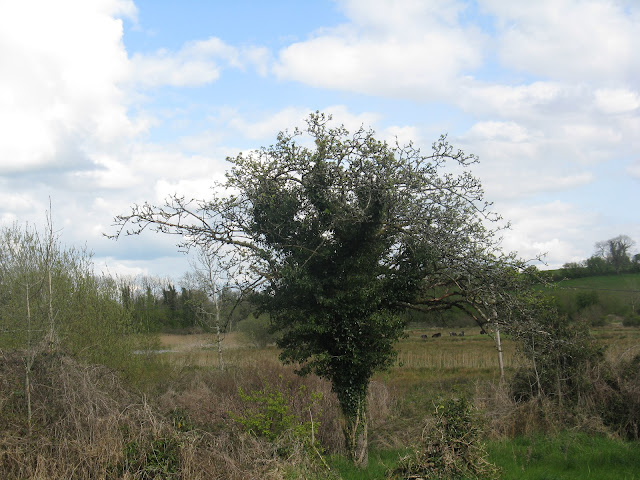 So all in all I feel that I’ve accomplished what I set out to do. It was to be a time of transition, to find my way-perhaps a new way and  I will continue to learn about Ireland-the people, the land, the myth, the song.

Thank you to all that followed this daily journey on my other blog and a heartfelt thank you to those who took the time to leave comments. 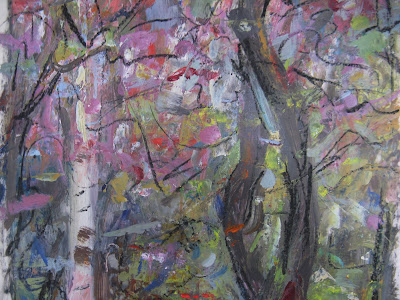 Now that I am back home, I have been taking advantage of this gorgeous weather to get out and do some plein air work. I wondered if I would be inspired to keep on with it after my trip and happy to report that it is in my blood- I will always go out into this beautiful land and paint.

Go n-éirí an bóthar leat
may the road rise to meet you
Posted by Jan Yates, SCA, Canada at 12:27 AM No comments:


This weekend I took some artists out for evening plein air sessions. 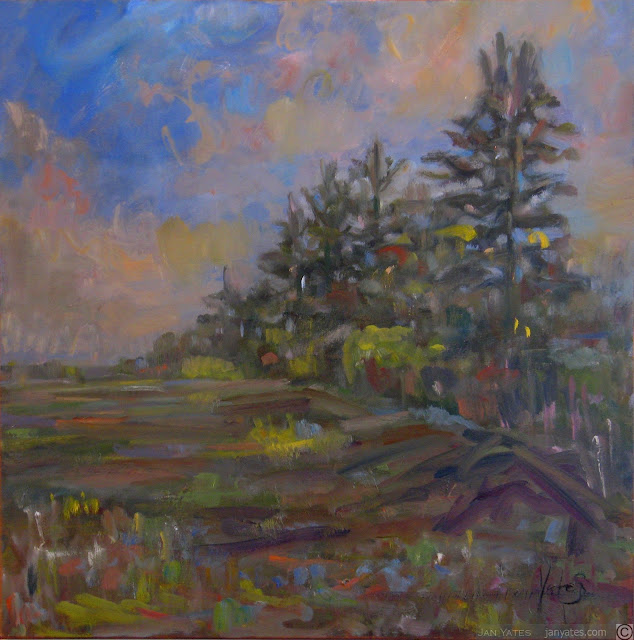 The image above was rendered over the below under painting and I quite like the added texture.

Here is the hated painting-overworked and contrived. 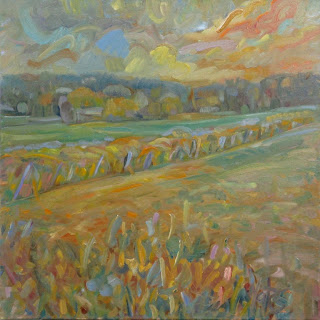 I am much happier with this but will re-examine with a fresh eye in a few days, although I feel the composition is sound and I like the overall feel of the work. 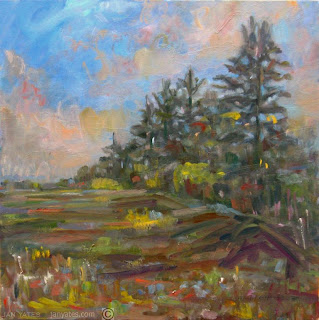 *If you live local and love art & nature, please join us for evening plein air sessions throughout the summer. Just contact me and I will be happy to send you details. Right now the weather is ideal for painting outside as bugs are minimal, light is beautiful, and the air is heady with the scent of all things growing!
Posted by Jan Yates, SCA, Canada at 9:00 PM 1 comment:


I feel a little guilty painting so much when responsibilities have piled up during my Ireland escape and they do demand immediate attention. And considering I had a whole month to delve into art I really should restrain myself but just can’t help it. As well, my partner is away for the long weekend so how can I not take advantage of uninterrupted time? And the weather..well, temptation is too much to bear and I must succumb. 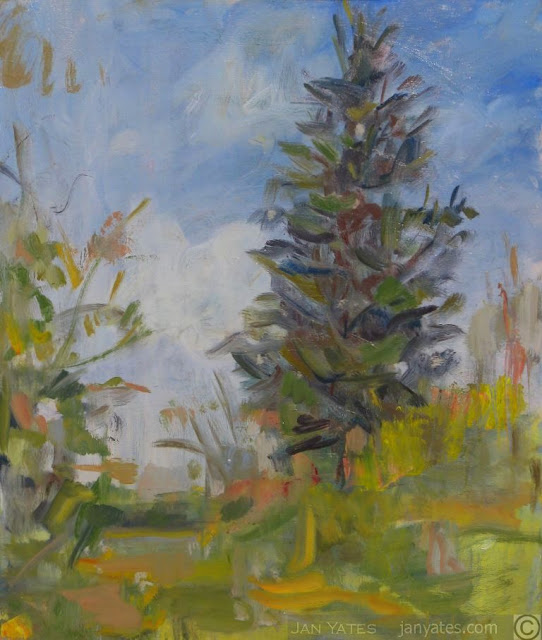 The location is steps from my studio, with this path leading out to my beloved field. 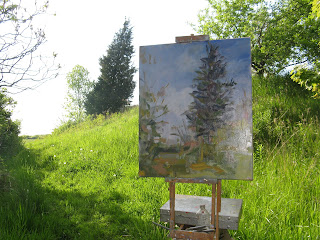 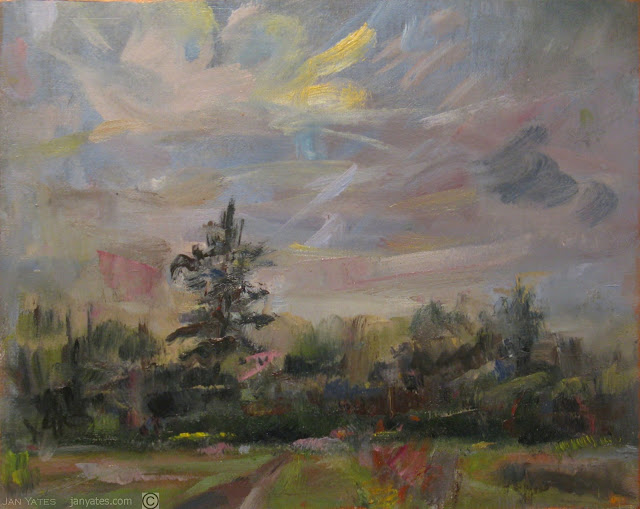 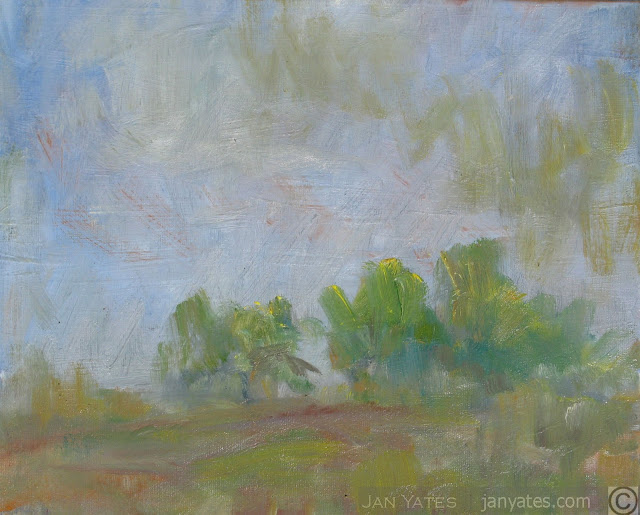 I found the challenges of painting so many greens in Ireland did pay off however the greens here do have more varied yellows this time of year. For Ireland's greens: reds, violets, oranges and Indian yellow were mixed  primarily with indigo and ultramarine blue-some thalo. Of course cadmium yellow light is indispensable no matter where you are. 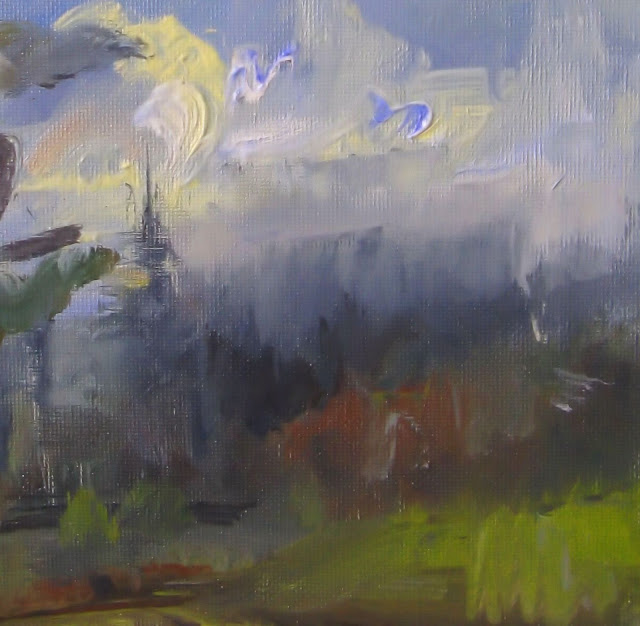 A new series of outdoor classes start next week.. 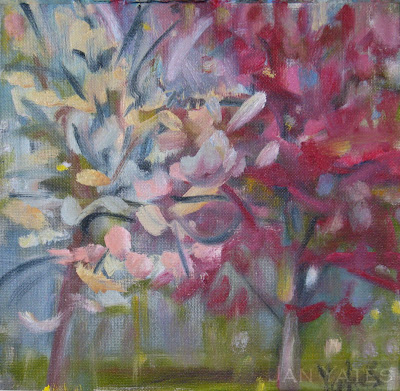 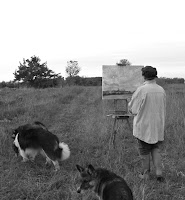 Since moving back to Canada from California Jan Yates has been elected as a member of the Society of Canadian Artists and her work is collected throughout North America, the United Kingdom and Australia. She has been the recipient of numerous grants and awards with recognition from the Ontario Arts Council. OAC international residency grants have also supported Yates’ work in Ireland and the Shetland Islands Yates is a seasoned educator, conducting workshops in encaustic painting, oil and cold wax media as well as direct-encounter making (plein air & land art).

Whether you require advice on painting techniques and challenges, or seek mentor-ship when it comes to marketing your work, we will address personal struggles, goals and solutions best suited to your journey.

If you are just starting to find your way, or already established in your practice, this is an opportunity to clarify your direction and objective as an artist. Working together, we will identify your individual goals and strike a personal course crafted by your vision.
more information here

If you are interested in purchasing a painting or would like an overview of prices, just email me. I will forward a price list or answer any enquiries you may have. I ship throughout North America, Europe and Australia.

Do you own a cottage or vacation home? Would you like to own one of Jan's paintings? Collect original art in exchange for letting the artist spend time in your vacation home (when you can’t be there or off-season). click image for info-serious inquiries only.

This Land is OUR Land